The cell cycle is a series of events that take place in a cell leading to duplication of its DNA and division of cytoplasm & organelles to produce two daughter cells. In other words, the cell cycle is an ordered series of events that involve cell growth & cell division to produces two new daughter cells. Although cell division occurs in all organisms, it takes place very differently in prokaryotes & eukaryotes. Here, I will tell you only about the eukaryotic cell division.

Basically, cell division is a process by which new cells arise from other living cells. It doesn’t stop with the formation of the mature organism and also continues in certain tissues throughout life

Now, let’s study each phase in detail below…

Interphase is the phase in which the cell prepares for division by undergoing both cell growth and DNA replication. You can also call it as the resting phase of the cell cycle. Altogether, it occupies around 95% time of the overall cycle. Interphase consists of at least three distinct stages during which the cell grows, produces new organelles, replicates its DNA, and finally divides. These stages are as follows:

An active eukaryotic cell will undergo through G1, S phase (synthesis phase), G2, and finally mitosis as it grows and divides. After completing the cycle, the cell either starts the process again from G1 or exits the cycle through G0. Altogether, interphase occupies around 95% time of the overall cycle.

The cell cycle of Mitosis

The name ‘mitosis’ comes from the Greek word , meaning “thread”. Further, the name was coined in 1882 by the German biologist Walter Flamming. Mitosis is the most dramatic stage of the cell cycle. Basically, it starts with the separation of the daughter chromosome and ends with cell division (cytokinesis).

In mitosis, it results in two daughter cells each having the same number of chromosomes as the parent nucleus. Mitosis maintains the chromosome number & generates new cells. Either haploid or diploid cells can undergo mitosis. Haploid mitotic cells are present in fungi, plant gametophytes, and in a few animal cells. The purpose of mitosis is the growth of the organism. Moreover, it also replaces the worn-out cells.

Mitosis is further divided into five sub-phases, which are:

Emphatically, it occupies almost half of the mitotic cycle. It is the first stage of mitosis. During prophase, the duplicated chromosomes prepare for segregation and the mitotic machinery is assembled. Prophase occurs in the following steps:

Chromosome compaction or chromosome condensation occurs during early prophase. Chromosome condensation is a process by which cell converts chromatin fibers into much shorter, thicker structures. However, it does not alter the nature of chromatin fiber. The process of chromosome compaction is assisted by the enzyme condensin and topoisomerase II. As a result of compaction, the chromosomes of the mitotic cell appear as distinct, rod-like structures. At this stage, each replicated chromosome consists of two identical chromatids held together by a structure known as a centromere. The centromere is the residence of highly repeated DNA sequences that serve as the binding sites for specific proteins.

As the cell progresses into mitosis, the microtubules of the cytoskeleton undergo sweeping disassembly. Cytoplasmic changes lead to the development of mitotic spindle.

Firstly, microtubules appear in a “starburst” arrangement or aster around each centrosome during early prophase. After that, the centrosomes separate from one another and move to opposite sides of the nucleus. Thus, they serve as the two poles of the mitotic spindle. Following mitosis, one centrosome will be distributed to each daughter cell.

Dissolution of nuclear envelope and positioning of cytoplasmic organelle

In higher eukaryotes, the end of prophase corresponds to the breakdown of the envelope. However, it is not a universal feature of mitosis and does not occur in all cells. For example, unicellular eukaryotes (yeasts), undergo close-mitosis in which nuclear envelope remains intact. In this case, the daughter chromosome migrates to opposite poles of the nucleus. After that, it divides into two.

Some of the membranous organelles of the cytoplasm remain relatively intact through mitosis. These include mitochondria, lysosomes, peroxisomes, and chloroplasts.

The dissolution of the nuclear envelope marks the start of the second phase of mitosis – prometaphase. Indeed, it is a transition period between prophase & metaphase. During prometaphase, the microtubules of mitotic spindle attach to the kinetochores of condensed chromosomes. The kinetochores of sister chromatids are oriented on the opposite side of chromosomes. In addition, the chromosome shuffle back & forth until they eventually align on the metaphase. At this stage, the cells have reached the metaphase.

Metaphase accounts for approximately 4% of the cell cycle’s duration. During metaphase, the chromosomes aligned at the equator of the spindle, mid-way between the spindle poles. The plane of alignment of the chromosomes at metaphase is referred to as the metaphase plate. It is an imaginary line that is equidistant from the two centrosome poles. line The kinetochore-microtubule attach sister chromatids to opposite poles of the spindle.

This one is the final stage of mitosis. During telophase, the chromosome tends to collect near their respective poles. The mitotic spindle disassembles, the nuclear envelope reforms, and the chromosomes uncoil. Meanwhile, the division of the cytoplasm starts with the contraction of the contractile ring.

Duration of the Cell Cycle

The time required to complete certain events varies greatly from one cell type to another, even in the same organism. A typical human cell might 24 hours to divide. Conversely, mammalian cells that line the intestine can complete the cycle in every 9-10 hours.

The G1 phase will continue for approximately 11 hours, S phase will continue for 8 hours, G2 phase for nearly 4 hours. The complete process of mitotic cell division (M phase) is nearly 1-1.5 hours. Prophase is the longest among six phases of mitosis i.e., 30-60 minutes. While metaphase is 2-10 minutes, anaphase 2-3 minutes and telophase is 3-12 minutes long. Some cells may divide faster than human cells whereas some cells may take more time to complete an entire cell cycle. For example “budding yeast” will complete the entire cell cycle (4 stages of the cell cycle) in about 90 minutes.

How cell cycle is regulated?

It is an internal process to control the rate of cell growth and division. Cell cycle regulation is a necessary process because, without cell cycle regulation, cells could grow in an uncontrolled manner and causing great problems for the host organism.

The progression of cells through the cell cycle is controlled by checkpoints at different stages. Now, you must be thinking that what are checkpoints? A checkpoint is one of several points in the eukaryotic cell cycle at which the progression of a cell to the next stage in the cell cycle can be halted until conditions are favourable. In multiple cell division, it is most important that each new daughter cell must receive a complete and accurate copy of the genome. Moreover, chromosomes must be duplicated once and only once before mitosis.

Meiosis is a specialized kind of cell cycle that reduces the chromosome number by half, resulting in the production of haploid daughter cells. In addition, Meiosis includes two sets of divisions that distribute the haploid set of chromosome and ultimately results in four cells.

The cell: A molecular approach by Geoffrey M Cooper, chapter 16, the cell cycle. 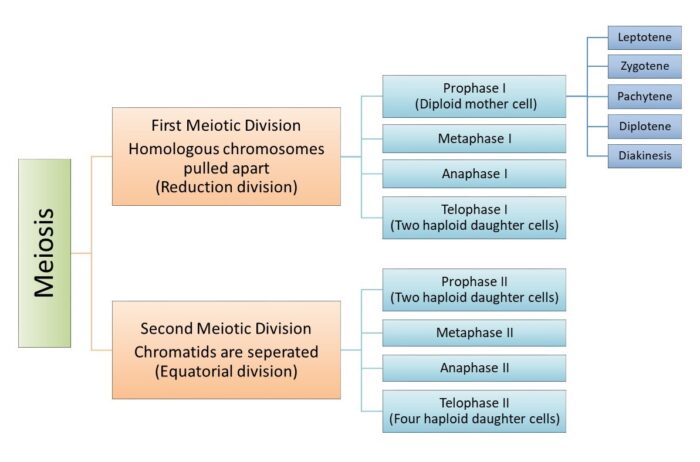